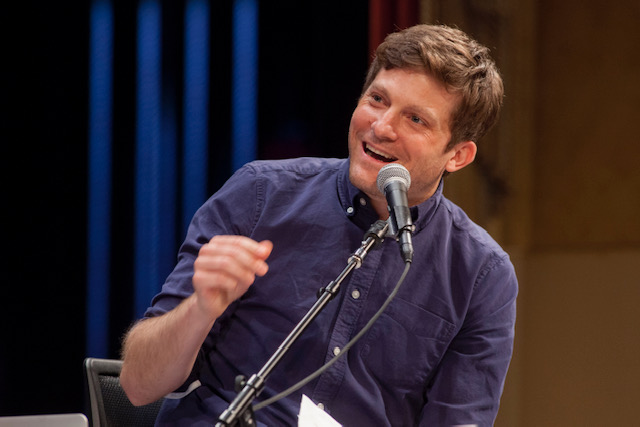 Sunday Pod curator Jody Avirgan’s 30 for 30 podcasts series recently released its fourth season. Jody is the host of the podcast as well a producer and the series’ editor. Sunday Long Read producer Étienne Lajoie talked to him about the first few episodes of the new season. The interview has been edited for clarity.

Q: Before we get into the episodes, why did 30 for 30 go from a serialized series last season to single-episode stories for the fourth season?

A: It was always part of the plan, to have the flexibility to do multi-parts stories and be able to do individual stories. To me, in the larger sense possible, my favorite thing about 30 for 30 is the flexibility and the diversity of stories you can tell. And that means in terms of the topics we choose––we can tell all sorts of stories––and also in terms of how we approach them.

Q: Is there a throughline, a common theme, in the five episodes of season four?

Q: Juiced, the first episode of the new season, is the story of former MLB player Jose Canseco’s book about the use of steroids in baseball. What was your vision when you began working on this story and was the final product close to what you had envisioned?

A: In some fundamental way, I think I have an instinct that the bigger the story, the smaller the angle. And also, the reverse applies. In this case, I knew that trying to tell “THE STORY OF STEROIDS IN BASEBALL,” or even “THE JOSE CANSECO STORY,” was going to be a fool’s errand. Frankly, if this story changed in its conception in any way, it may have gotten a little bigger. At its core, I like that it’s a small strange angle on this big story.

Q: The overarching story of Canseco’s steroid use is told in many ways in the episode––it’s partly a story about book publishing, partly on the impact of this book on the game of baseball, as well as how society responded to it. How did you mesh together these strands into a 45-minute episode?

A: Our approach is really to stick to a story that moves. You got to find a story that you can latch on to as someone who’s telling it and someone who’s listening to it, and then you layer the ideas and the larger themes on top of that. This was a story that I feel did that. You are looking for those opportunities where the plot leads you to the ideas. We want the story to go first and we want every idea to be introduced by the characters in the story.

Q: What did Canseco think of the project and how did he feel about the podcasting aspect––having to tell his story this way?

A: It was no surprise a bit chaotic to organize. One thing that we ask of our characters is to give us information on two levels: on the one hand, we ask them to just tell us what happened and then they also have to take another path to that story and describe their emotional life during that. So it’s a pretty high bar for our characters, we ask a lot of them. And for Jose Canseco, that can be kind of tough. He does not remember a ton, he writes revisionist history in his own head. We just had to embrace that.

Q: In the 1990s, Canseco was arrested for domestic violence. In the bonus episode, you talk about this with Andrew Mambo, the reporter for the story. How did you, Andrew and the team approached this and how did you want to address it in the episode?

A: We thought a lot about the fact Jose Canseco behaved in some awful ways and so we thought a lot about how that plays into our project––whether we should do a story about Canseco at all––and again we came back with this notion that we’re telling a very small story that happens to tie into these larger things, but we’re not doing “The Jose Canseco Story.” I don’t think anyone will listen to our piece and think of him as a laudable character. We did interview him because he’s a central part of this story and that’s the extent of it.

Q: Let’s talk about the second episode––All In: Sparking the Poker Boom. You said earlier your technique was “The bigger the story, the smaller the lens” and vice versa. Where did this story fall on that spectrum?

A: It took a while to figure out what the lens was going to be. We choose this production company that was tasked with making this story. They went in thinking this was going to be a story about stars and about starpower and all of a sudden this complete amateur [Chris Moneymaker] with this crazy last name comes out of nowhere and they have a magical story fall into their lap. It’s a little meta because we are telling a story about storytelling.

Q: Did you find similarities between how Matt Marantz––the producer of the 2003 World Series of Poker––approached that event and your approach to podcasting?

A: A little bit. It’s just the challenge of anyone who’s making non-fiction, narrative work which is how do you make this compelling, how do you be true to what happened while at the same time tap in to simple ideas and simple themes. No one is to going engage unless it’s a compelling story.

Q: There seemed to be two aspects to Marantz’s approach to the production of the event: on the one hand, there are the technological advancements––small cameras under the table, for example, to show the cards––and the framing as reality television. Were these things you saw yourself when watching poker on television, or did you learn about them during the production of the podcast?

A: I remember poker being on t.v. when I was pretty young and having this question “Why the hell is poker on t.v. fifteen hours a day?” And I do think, it was because, it took this approach, as you put it, of reality t.v. It made it much more about the characters and the conflicts and the poker itself was really just a platform on which to lay that in. The other thing that he did, he very much made choices about the storytelling that manipulated the timeline and the subject in the service of telling a good story––so for instance, Chris Moneymaker, the guy who ends up winning it all, does not show up until the middle of the fourth episode and I think his first time on screen, he screws up or he has a bumbling moment so they clearly play him as this rube and then played it up to make it as if he was coming out of nowhere. Of course, when they started doing this, they knew he won so they had to make a narrative choice.

A: A lot of them are stories that people have told before so one of the big challenges is to get people in a place where they can talk about it in a way that seems fresh and new even though they are saying that they’ve said before. We have a few tricks for that. The main one is just to spend a lot of time with someone, get them comfortable so then they open up, ask them questions over and over, and sometimes we’ll bring video and have them describe it as they are watching. Something about seeing it triggers some more emotional and descriptive language.

Q: In episode three, Six Who Sat, you begin by framing the story as “Running is popular now, but it’s in great part because of the battles fought by these women.” Why did you decide to tell this story?

A: There’s just a natural appeal to hidden history for us and so anytime you have an event as big as the New York City marathon that has a secret moment in its history that not that many people know, there’s an appeal there. Moreover, that moment is like an actual specific moment––in this case, a protest––that’s great because you know you have a narrative point to hang your story around and then anytime it taps into larger themes like misogyny and discrimination and protest, it feels important. This story checks all the boxes for us.

Q: Did you find or talk to people who opposed the presence of women in these races?

A: That was a big challenge for the story as well because obviously there were impediments and there was misogyny both within running and in society as a whole but there wasn’t a clear boogeyman. There was an institution, the Amateur Athletic Union, that was putting up a number of laws in the book that made it harder for women to run, so the fight was really against this institution. As is often the case, there is not one evil person at the heart of it, it was societal. That’s often the case of how discrimination and bias works: it’s all the subtle things added up together.

0 comments on “An interview with Jody Avirgan”