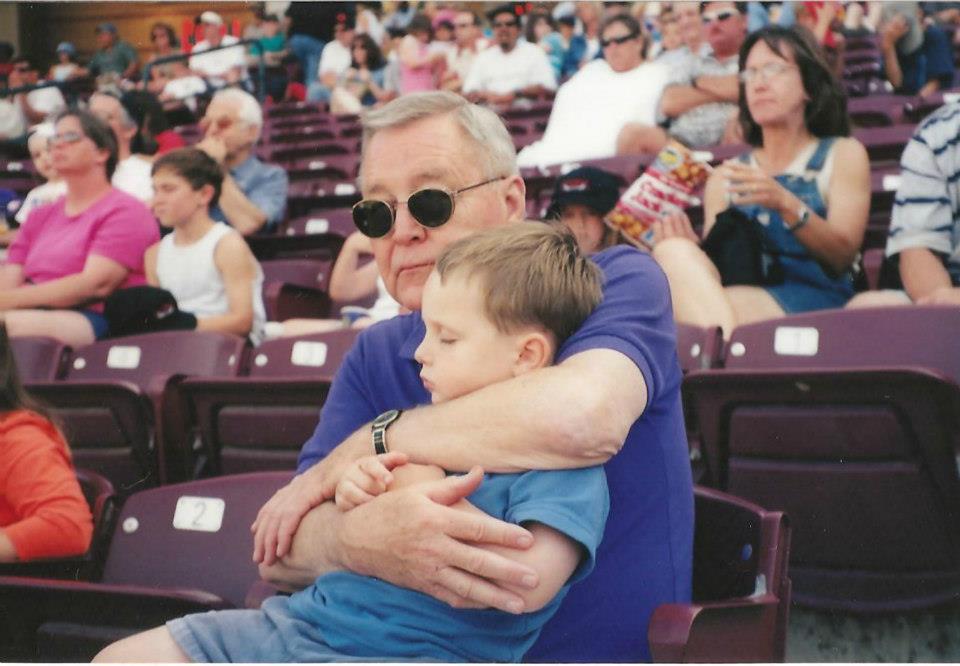 What would I have done?

The last time I saw my grandfather, he did not remember me. It was November two years ago and we were in Dallas. When my mother drove us from the airport, the brightness and flatness of most things disoriented me. The light was nearly white, the sky a single shade of blue. In the car, on the way to my grandfather’s nursing home, I felt lonely. He would die here.

When I was younger, he lived in the mountains. We used to drive there on school holidays. During the winter, my father would put chains on the tires and the car would crack over the ice. I made my sister sit by the far window, the one closest to the cliff, so I did not have to look over the edge.

We loved the house in the mountains. In my memory, it’s greyish blue with a wooden porch and a screen door. Whenever the car pulled up, the tires would crunch over the gravel driveway, and Granddad would stand on the porch waiting for us. In the summer, he might hold a can of beer. He always wore a polo shirt tucked into jeans, sometimes striped and other times yellow. The three of us (my brother, sister, and me) would run up the porch steps and hug his legs, then race into our room, where he had placed piles of toys on our beds.

The rest of our weekend would pass blissfully. Granddad cooked us waffles for breakfast, handed us peanuts to toss at squirrels, scooped us bowls of Rocky Road ice cream, slipped us cookies from the jar atop the fridge. During the winter, we went sledding; during the spring, we walked in the woods. On our final afternoon, we would pack up and pull out the driveway, and Granddad would wave goodbye from the porch. Sometimes, he’d follow the car, waving and blowing kisses. We would turn the corner, and I’d look through the back window to see him standing alone in the middle of the street.

He visited us too. He gulped down the sugary lemonade my sister and I sold to the neighbors, and gave me a quarter when I burped on command. He and I stuck pennies to each others’ foreheads and bet on whose would stay the longest. When I told him stories about the fairies in the backyard, he would ask me questions. What do they eat? Where do they sleep? In the rose bush, I’d tell him. Of course, he’d say. I should have known.

When his car pulled away, we could chase him down the road, the asphalt blackening our bare feet. He would honk, and we would jump and wave, then he’d turn and drive out of sight. The three of us kids would bend over panting, another weekend gone.

Granddad was a writer. He was retired by the time I was old enough to speak with him, but before I was born, he had a life of jobs that required a skillful command of language: middle school teacher, college dean, and, briefly, newspaper reporter. In his mountain house, he had a big bookshelf. We wrote each other letters and talked on the phone. We would always ask what the other was reading. Harry Potter. Stephen King.

One of the last jobs he had before he retired was with the FBI. He worked in San Diego and Quantico and Los Angeles. In L.A., he had been a spokesperson.

I had a lot of questions. Do you have a gun? I asked. Did you put people in jail? Did you go on TV?

Later, I searched his name on the Internet. Fred Reagan, FBI. His name appeared in newspaper stories that described bank robbers and serial killers. In some of his quotes, he sounds performatively macho — like a parody of a true crime character, a voice I did not recognize. When speaking to The Los Angeles Times about the retirement of a colleague, Granddad said, “He’s Mr. Reliable, always the guy called on when a mission of importance is at hand. Chefalo can take them down hard or easy. He has a real good feel for it.”

When I was nine, we moved to another house in the same city. There were no rosebushes in the backyard, but by then I had stopped telling stories about fairies. Around that time, my grandmother moved from Virginia to live near us. At first, it would be a temporary move to help my mother out with work. Then one year passed, and another.

I never asked Granddad about Grandma. They had been divorced for decades and hadn’t seen each other since my parents’ wedding. My other grandparents lived in Pennsylvania and we didn’t visit often. Granddad and Grandma’s arrangement was all I knew.

It was better, almost — twice the fun. With Granddad, we got the mountains and ice cream; with Grandma, we got thrift shopping and diet coke. For a few years, their lives clung to mine, steady and balanced.

I turned fourteen, then fifteen.

By sixteen, things had changed. Granddad spent part of the year in Texas. We stopped driving to the mountain. I was busy with school, and soccer, and planning for college. He faded out of my life slowly, then all at once. I suppose I faded out of his too.

Though we didn’t see Granddad much, I started talking with my mother about him. He was my God, she told me.

He had been a strict father with high expectations — though he was always playful with his children and their cousins. For my mother, he could do no wrong.

But one day, he left. He rented out an apartment, came back only for his clothes. Then he moved across the country for another woman. My mother was sixteen. They didn’t see each other for a while.

Why, I wondered, had he been so present in my life if he had been absent for part of my mother’s? Did he feel guilt? Was he trying to make up? Where I had once felt wholehearted affection, I noticed something new and nagging that I couldn’t quite name.

Granddad couldn’t give answers even if I’d asked. By then, dementia had begun its steady takeover. The few times I saw him in person, he had trouble paying attention. Our phone calls grew shorter, twenty minutes, then ten, then five. It’s so good to hear your voice, he would say. Nice to hear yours too, I’d say. We’d hang up.

As his condition got worse, he’d ask, Who is this?

Oh, my granddaughter. Thanks for calling, sweet child.

Then we stopped calling. I told myself I would call, but I never did.

He sold the mountain house and moved to Texas full time. I wouldn’t see him for another six years.

Is he eating and sleeping ok? What does he do all day, now that the facility is under lockdown? He’s stopped speaking, I’ve been told — is that still true? He’s in a wheelchair? Does he seem to be happy? Can you tell?

I apologize for my questions. But, I write, I live abroad and don’t usually have the chance to visit.

The facility probably doesn’t know who I am. In fact, I visited just once, that November trip two years ago. My mother and brother and I flew to Dallas. We bought Granddad vanilla milkshakes from In N Out — a favorite treat, facility staff told us — and sat with him while he ate lunch, sometimes spoon-fed by my mother or my aunt.

When I first saw him, after all those years apart, I nearly fell over from the shock. He was small and pale, and his face had taken on a different character, no longer keenly observant but dazed and drifting. He could hardly stand up.

Granddad didn’t recognize me, didn’t know my face or name. Baby, he said, pointing to me. To my younger brother, he said: Man.

In the end, it was my brother and I who could hardly stand up. Back at the rental house, we collapsed onto the kitchen floor, mourning lost time.

A few days after I send the email, the facility director responds to me.

Yes we are on lockdown per following our governing authorities.  We are doing Facetime with family members so they can stay in touch with their loved ones.  We are very busy here.   Your grandfather is doing fine.  He is eating and sleeping just fine.  He has a very healthy appetite.  He passively participates in Activities.  He does not talk much but he does sometimes.  Yes he is in a wheelchair but that does not stop him from trying to get up and walk.  He is not stable to walk.

Recently, I spoke on the phone with a woman from Madrid. In March, her father died in a nursing home. He had developed pneumonia but he was never tested for Covid-19. She will never know.

The burial was delayed because the funeral service was overbooked. When the family was finally able to bury him, she and her siblings stood far apart, careful not to touch.

She thought about the last day she saw her father, the day many facilities in Madrid would close their doors to visitors. They had played cards. Then she took him to his room. I’ll see you tomorrow, she told him. Now, she wonders why she hadn’t returned to the facility and demanded he come home when she learned they were closing. “They would have called the police,” she told me. “But at least I would have tried.”

I told her that my Granddad was in a nursing home, too. I wanted to say more, to share in her sense of grief and culpability, but I felt myself stumbling over the subjunctive: If I had known, I would have… But what would I have done? If I had known the virus would shut down much of the world, if I had known the virus had a good chance of killing someone over the age of 70 — would I have left Europe and gone to Texas while I still could? I don’t know.

I imagine him alone in his room. What would he be doing right now, early morning in Dallas? Maybe he’s sitting in his bed, gazing out the window. Maybe he’s staring at the door, waiting for someone to enter. Whoever comes in, it won’t be me. Not for a while. Maybe never. If we were both younger, I’d write him a letter. It would be short so he wouldn’t tire out from reading.