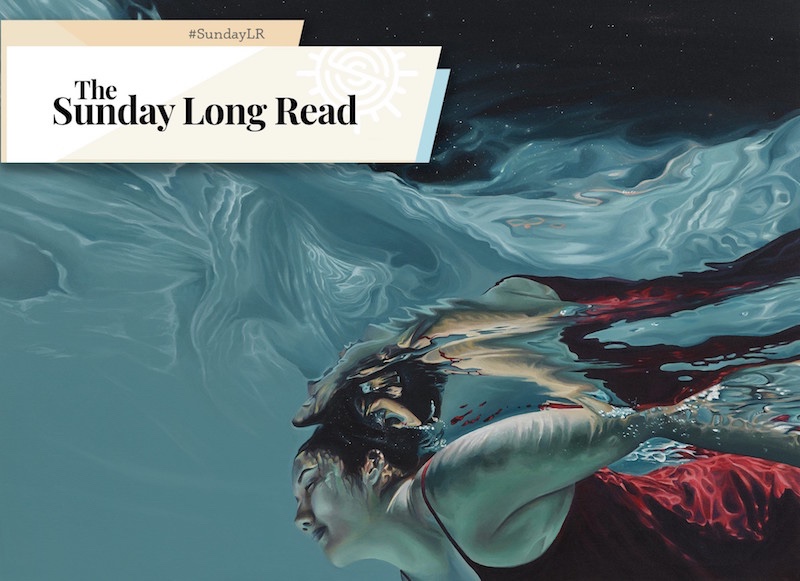 Happy Labor Day weekend! We hope you’ll have time to recharge your batteries this weekend before we plunge into what promises to be a fascinating and— one can hope?—semi-tranquil autumn…

We are honored to introduce our guest editor: Jessica Contrera is a reporter on the local enterprise team at The Washington Post. She writes about people whose lives are upended by the issues in the news; lately, that’s just about everyone. Jess joined the Post in 2014 after graduating from Indiana University. She grew up in Akron, Ohio and now lives in D.C. with her scruffy mutt Roscoe, who she’s trying to train to fetch the newspaper. And she was Don’s guest on The Sunday Long Read podcast last year.

The SLR is all yours, Jess…

Last Friday, deep in the crowd of thousands attempting to socially distance on the National Mall, a woman named Sharilyn Wagner was resting on a bench. She was wearing a bedazzled mask and fanning her ringlets with a sign that read, “I don’t understand how you don’t understand.” At 71, Sharilyn was old enough to clearly remember the first March on Washington. She’d come home from her segregated middle school and watched Martin Luther King Jr. on a little black and white television, beside parents who grew up picking cotton. She’d grown up to be a bus driver, one who was told that she couldn’t wear her hair in long braids. That was, until she fought the rule through her union in the 1970s, and won. Sharilyn is still driving buses through Texas five days a week. On the day of George Floyd’s funeral, when the August march was announced, she asked her supervisors for vacation time and planned her trip to Washington, pandemic and all.

I was cross-legged on the concrete beside her, sweating a gross amount and taking phone notes with my pre-carpal-tunnel thumbs. I wanted to stay with her for days, just listening. I wanted to know if, on her $70 taxi ride back to the Baltimore airport, she would feel like something had shifted in America that day. Or if when she saw the event rehashed on the evening news, the power of what she had seen would feel flat and fleeting. I wanted to know what she would tell her great-grandchild.

Instead, I thanked her profusely for the five minutes of her time, wrote a quick feed, sent it by text because the cellular signals were jammed and went in search of another voice to add to the fast-paced, constantly-updating story that would end up on the front page of The Washington Post and the forever record of what had happened that day.

So goes the necessary and critically important churn of covering breaking news and live events, I know. But every time I do it I am reminded of what an immense privilege it is to ever have the chance to do journalism that slows down. That sits and stays. That doesn’t just dig beneath the surface but finds all the many layers below.

What I love most about narrative, long-form, call-it-what-you-want journalism is how it allows for all those layers to exist right beside each other. How you can go on a whimsical journey with Allison P. Davis into Mariah Carey’s quarantine palace of candles and soft blankets and come away better understanding the pain of an icon who has spent decades watching her Blackness be erased. Rukmini Callimachi can explain the police tactics that led to the raid on Breonna Taylor’s apartment and take you deep into her desire to mold her life into an example for her niece to follow, writing her goals on sticky notes, junk mail, napkins and envelopes. You can read Katie Engelhart’s masterful investigation of the first nursing home outbreak in the country and feel a fiery rage about the constant missteps by staff and a deep well of understanding that in the circumstances, you would have failed too.

Done right, this work isn’t about superfluous word counts, praise-filled tweets and prize season deadlines. It’s about choosing both and over either or. Making people feel like people, not “characters.” Choosing empathy. And then knowing that what you wrote, especially when given the responsibility to craft words that tell someone else’s experience, will never be the whole story.