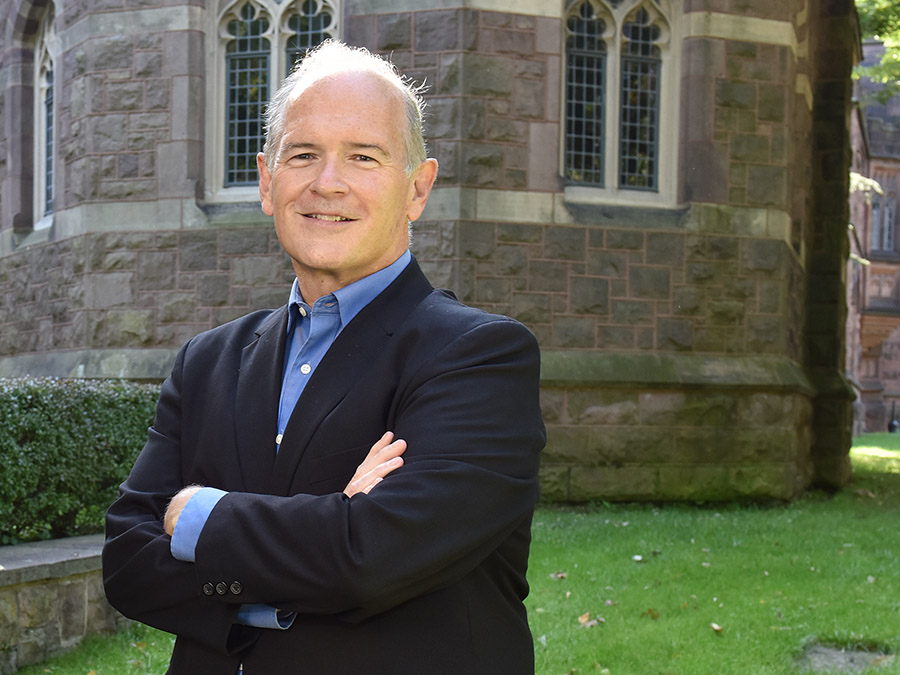 This was Jim Dwyer’s approach to tennis:

“My entire tennis game is based on zero skill but a willingness to chase any ball that the other player thinks is a foregone conclusion.”

Lobs and drop shots were not the only things Jim Dwyer never gave up on across his distinguished and consequential life, cut short by complications from lung cancer at 63.

He never gave up on stories, from standing up for the rights of infants born with HIV to chronicling the heartbreaking moments of those who perished at the World Trade Center.

He never gave up on journalism, embracing the challenges and wonders of the digital age.

He never gave up on New York, the city he loved and served.

He never gave up on life, staging a late-inning rally in his hospital bed at Memorial Sloan Kettering to, while on a respirator, squeeze hands as a way of communicating with the wife and two daughters he adored and was devoted to.

And, really, one of the last of the great big city columnists never stopped filing gorgeous copy. Jim during the summer had won a brief reprieve from the hospital and was at his house in the Poconos. I sent him the poem “Tubes” by Donald Hall, who had fought his own fight with cancer.

‘Of all illusions,’
said the man with the
tubes up his nostrils,
IVs, catheter,
and feeding nozzle,
‘the silliest one
was hardest to lose.
For years I supposed
that after climbing
exhaustedly up
with pitons and ropes,
I would arrive at
last on the plateau
of walking-level-
forever-among-
moss-with-red -blossoms.
But of course, of course:
A continual
climbing is the one
form of arrival
we ever come to—
unless we suppose
that the wished-for height
and house of desire
is tubes up the nose.’

Jim wrote back with a note that had the shape and strategy of a newspaper column by a brave prince of the city facing his most daunting deadline.

“Donald Hall’s reflections on tubes were almost unbearable. The last things keeping me in the hospital were two tubes in my chest, one on the side’ which I could manage, but another to the posterior, like a bony finger jabbed between the ribs. It was inserted the day after I thought I was going home. The first 30-something days, I had pretty much gotten by with Tylenol, but that night, when the finger was sticking me in the back, I was feeling very sorry for myself and told the kind nurse that it hurt.

‘Do you want some Tylenol?’ she asked.

‘Let me see what else we can do,’ she said, and a few minutes later, she informed me that she had gotten permission to give me Dilaudid, a narcotic with the kick of a small nuclear missile.

First, she got me fixed up in the bed, pillows under each arm, head, and when I was in position for sleep, she sent the Dilaudid into the IV line.

At first, there was no noticeable difference. Then it was like nothing I’d ever felt, an army of occupation on the left hemisphere of my body from my skull to ankle, exploding inside me. The right side was pretty much unresponsive, but I feared that it would tip over to the left, that there were more armies ready to occupy, and that all of me would detonate.

I saw the nurse wrapping up her business in the room.

She rubbed my forehead. The army inside became quiescent. I was going to survive.

‘If anything, just hit the call button,’ she said.

From then on, I got Dilaudid every night. If a nurse tried to push Tylenol instead, I said no, it wouldn’t work, or I’d just had some and needed the stronger stuff. After four nights of this, they decided my chest cavity was sufficiently clear — that the evacuated space where the bottom lobe of my right lung had been was now meeting my diaphragm, and there were no cavities to worry about and they could pull the tubes and send me home.

Now in the Poconos, walking four miles a day, a bit harder each day. I jogged about 50 yards today and coughed my brains out. Hit tennis balls with my daughter Catherine for five minutes yesterday and was sucking wind. That will have to change. This week is supposed to start chemo. Memorial Sloan Kettering has a new building that feels like a Ritz Carlton in Dubai. Gleaming surfaces, I am guessing, do not work as well as Dilaudid.”

Copy like that makes your heart stop. Writing it was what kept Jim’s heart beating.

Jim’s Pulitzer work from 1995 included a story about the city’s infrastructure, about the craftsmen and laborers from long ago who laid the pipe that undergirded the city of Jim’s birth and death.

“We have left all the care of our present to these forgotten people: when the crash comes, the dust of our own neglect rises, and we glimpse through the clouds the durable genius of good work.”