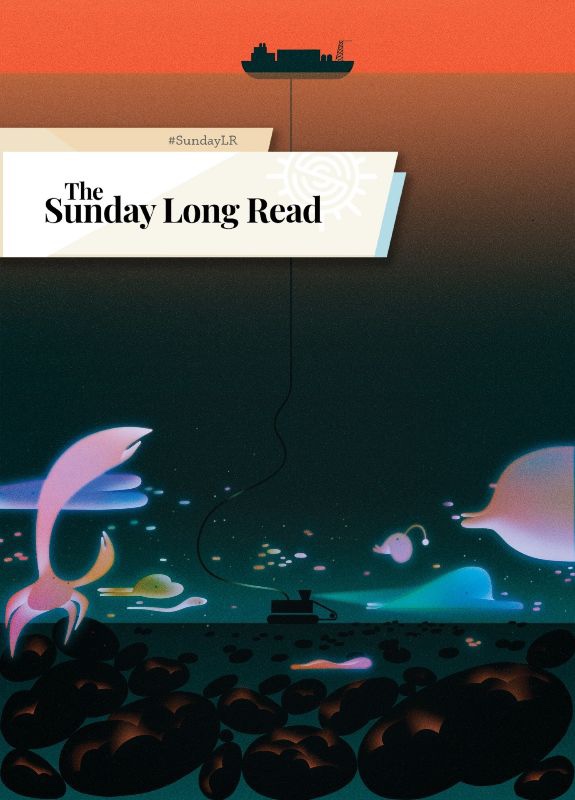 Happy Sunday! We’ll be off next week celebrating July 4th, but SLR members will still get a bundle of picks. You can join them in supporting us here. Until then, we think you’ll enjoy this week’s reads (hopefully some place cool!), chosen by today’s esteemed guest editor: Ian Urbina.

Ian writes for a variety of magazines and newspapers. He also runs a nonprofit journalism organization focused on stories about the wild and often worrisome things that happen at sea.

And now, The SLR is all his!

If envy is the highest form of flattery then this essay should make The New Yorker’s Elizabeth Kolbert blush. Her exquisite piece published this week about the madcap global race by companies to mine the world’s seafloors of precious metals flushed me with a distinctly journalistic and jealous bile that most every writer has surely experienced while watching a peer slaughter a topic.

After 17 years on staff at The New York Times, I left the paper recently to start my own non-profit news organization called The Outlaw Ocean Project that specializes on producing stories about the watery two thirds of the planet and the diversity of labor, human rights and environmental concerns that exist out there. Kolbert’s story focuses on seabed mining, a topic that was (and grudgingly still is) on my bucket list. This subject’s reportorial allure isn’t just its urgency. There is also rich metaphor and illustrative synecdoche about the peril and proclivity of market forces to ruin things before we even realize they exist or can measure their value. Turns out, what we don’t know can actually hurt us, as Kolbert makes clear in her discussion of the corporate hunt for the billions of dollars worth of blackened potato-sized polymetallic nodules sitting on the ocean floor that are so essential to the wind turbines, electric vehicles, solar panels, and batteries for energy storage that still require resources.

At a time when we understand and see exponentially more of the world around us, with so much at our fingertips and but a swipe or a tap away, we know shockingly little about the sea. Fully half of the world’s peoples now live within a hundred miles of the ocean. Merchant ships haul more than 80 percent of the world’s goods. Over 56 million people globally work offshore on fishing boats and another 1.6 million on freighters, tankers, and other types of merchant vessels. And yet journalism about this realm is a rarity — rarer still: reporting about the ocean bottom.

There’s a long history to this intellectual blind spot and some mesmerizing misconceptions have arisen from our lack of knowledge about what lies below. By far, my favorite: the Victorian-era belief that seawater became denser the deeper down in it you went, so much so that layers of more viscous deep water prevented some objects from descending below a certain point. A sinking ship, for instance, could only fall to a fixed level in the sea, hovering there for eternity, never reaching the bottom. A dead person only fell to a depth dependent upon the size of his midriff, weight of his clothing, and, according to some, the density of accumulated and unrepented sins. In this way, the sea was a terrestrial purgatory.

If the seas are truly our planet’s last untamed frontier, then the seafloor is a hidden domain beyond that, and one home to extractive activities of all sorts, including drilling for oil and gas, bio-prospecting by big pharma, bottom trawling for more catch, or hoovering up precious metals to make the gizmos we hope will save us from the climate crisis. These myriad activities go largely unchecked because they happen so far from land, away from the prying eyes of regulators, advocates, scientists, and journalists. Though cliche, it bears repeating that we have mapped more of the night sky than we have the sea’s depths. And in that void are hidden countless cures and creatures that we will never meet after seabed mining obliterates them.

I was reminded of this point in the last several years while reporting from research submarines near the Arctic Circle and off the coast of Brazil. Driving along the sea bottom, down in that dark, fantastical place, I couldn’t help but feel an almost-religious sense of marvel and humility as scientists kept telling me that they had no name for this or that weird abyssal critter swimming past my glass dome. But perhaps the more worrisome lesson that I carried back up to the surface, and one that Kolbert explains so smartly, is how difficult it is to make people want to protect what they have never seen — quite especially when the life forms worthy of discovery and conservation barely even fit within our categories of plant, animal, or mineral.

Though the sea can seem vast and all-powerful, it is vulnerable and fragile in part because environmental threats travel far, transcending the arbitrary borders that mapmakers have applied to the oceans over the centuries. That seabed mining feels inevitable, as Kolbert contends, is true. One wonders though whether it is high time we reimagine the ocean not as something we use — from which we extract fish or fuel or dump excess carbon or plastics — but rather as a place best left alone, protected to flourish.